You are here: Home / The Kitchen / Changing a Toddlers Diet for Better Dental Health 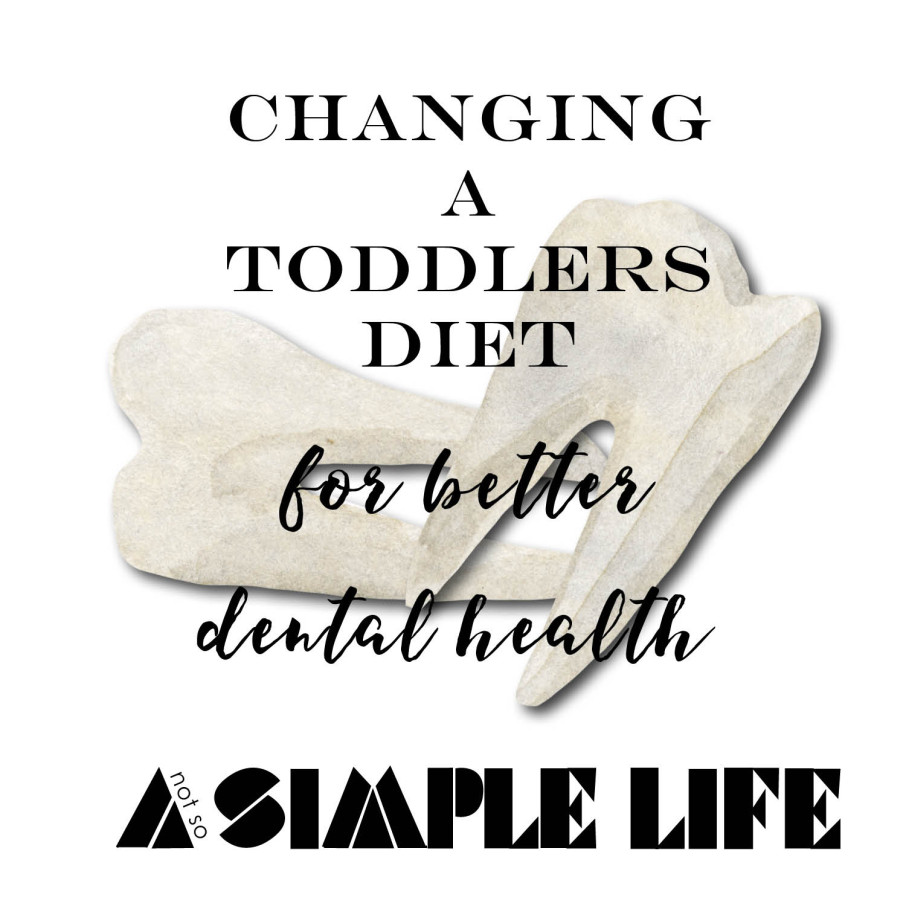 I haven’t been posting much the last year or so because my husband and my business has taken off and it, and managing it, along with a very active 3 year old, keeps me pretty busy. Today on a whim, I decided to take a look at the blog traffic and noticed that it was 1/10th of what it once was – boo! No new content means no new or returning readers.  I’m going to try and change that! During my little hiatus, most of me and my families diets have stayed the same, some things have changed. I have continued to live gluten, dairy, soy, tree nut, and peanut free but have moved to a diet with minimal grains, for multiple reasons but mainly because we have a few new cavities in our house 🙁 unfortunately.  I noticed what I thought were cavities in my little man when he was about 2.5 years old so I rushed him to our family dentist, who doesn’t see patients until they’re 3, to take a look.  After a good half hour of trying to get him to open his mouth, my dentist got a half glance and decided that he thought it was just staining. I should have trusted my mommy gut because fast forward about 6 months and my little man was complaining that his tooth hurt when he chewed on his left side. After visiting a pediatric dentist, I found out that his cavities are pretty severe and need to be taken care of right away. I was devastated and spent a lot of nights feeling super guilty and like I was a horrible mom.  I was determined to pin point the reasons why my son had developed these cavities so early on, here’s what I’ve come up with (to serve as a warning to anyone who might live a similar lifestyle).

WHAT COULD BE CAUSING TOOTH DECAY IN A TODDLER?

– Minimal calcium due to our primarily dairy free diet:  My son can tolerate dairy but he never eats a ton of it. He never drinks milk and only occasionally eats cheese. I just recently found organic grass fed, low sugar yogurt at our grocery store that he will eat also.

– Night time nursing: I was under the impression that breast milk shouldn’t cause any tooth decay due to it’s makeup but I’ve since heard from multiple other “crunchy” moms that their children have had tooth decay from nursing at night.  My son’s tooth decay was in his upper molars and I believe that’s because he would fall asleep and breast milk would pool in his mouth there. Our dentist agreed that she’s seen this frequently and said that once food has been introduced, care needs to be taken.

– Too much Fruit/Juice: My little man LOVES fruit.  We don’t snack on grain based items so fruit is naturally a good snack.  He eats bananas, apples, blueberries, strawberries, grapes and watermelon on pretty much a daily basis. When we need a portable snack, he eats freeze dried apples or strawberries and bananas. We also allow him to have a “Blueberry juice” in the morning (the Naked brand) to which we add his probiotics and vitamin D. I’m not really sure how to change this part of his diet.

– Inadequate brushing: When I thought I noticed cavities at 2.5 years old, I took it upon myself to start making sure that I was brushing my son’s teeth for him (to assure that they were brushed well).  Prior to that, there were times when I would just watch and let him brush them on his own.  If I could go back, I would let him brush first and then I would go back through and brush them for him.

CAN I STOP OR REVERSE TOOTH DECAY?

There are mixed reviews about stopping/reversing tooth decay, but I bought this book, Cure Tooth Decay: Heal and Prevent Cavities with Nutrition, out of curiosity a few years ago, because I have an area my dentist has been watching for a long time. Rather that get the area filled, I wanted to try and remedy the situation. I have had that area on watch for nearly 5 years,  when my body felt like it was deteriorating (see this post), before I went organic, gluten free, dairy free, and soy free and removed processed foods, chemicals, etc from my diet. It has yet to need to be filled. Back in 2012, before changing my diet,  my teeth didn’t feel strong. They felt loose, I was consistently developing new cavities, and they were painful at times (I even had one break).  I now, after 5 years, have no dental pain, have developed no new cavities, and also haven’t had any of the cavities that were starting to form back then progress further.  Can cavities be healed? I’m not completely sure but I definitely believe that a better diet will lead to better dental health and that’s the key in cavity prevention.

I have always been familiar with Weston Price’s theories in regards to nutrition and dental health and have tried to follow them loosely here and there but have never been super consistent. Mainly because it’s pretty hard to get a toddler to drink broth, or eat things like liver, and heart, or cod liver oil, etc.  Finding cavities in his teeth made me feel determined to find a way to get him to eat some of the vital nutrients he’s missing.  The great thing about the book Cure Tooth Decay: Heal and Prevent Cavities with Nutrition, is that it lays out some very specific studies and guidelines to follow, I just have to come up with some recipes that he’ll actually eat.

CHANGES TO MAKE IN MY TODDLERS DIET

– More calcium:  He needs more calcium to keep his teeth strong.  I’m pretty sure this is the main reason that he has tooth decay in the first place. Since finding his cavities, I have pushed more grass fed raw cheese into my son’s diet and started subbing out his snacks of apples, or grapes, or bananas with raw cheese. He doesn’t want it all the time but anything is better than nothing.

– Less fruit: Little Man does, and always has, and always will eat a lot of fruit – honestly, I don’t mind that he’s snacking on it because it’s a much healtheir snack than most kids eat BUT, subbing some of it for stuff with more calcium seems to be an easy enough transition for him.

– Add broths and offal: This one is going to be tricky. I have no idea how I’m going to get my son to drink/eat broth and eat liver, heart, etc.  We, as a family, don’t really eat offal so it’s going to be a learning experience for all of us 🙂

– No grains:  We pretty much only eat white rice and products with white and brown rice flour.  They are some of the least allergenic of grains and are low in phytic acid (an anti-nutrient that prevents us from absorbing vital nutrients – I’ll write more about it in a later post).  I actually have slight intolerances to both white and brown rice (although less severe than other grains) and I think my son has developed an intolerance to it as well because it seems that he gets slight eczema on his upper arms when he eats it.  Since my son started preschool in January, I have allowed him to bring gluten free pretzels to school as a snack on occassion.  He also has recently decided he’s not really into eating meat and asks for noodles or GF Hungry Howies pizza (our only processed food vice) for dinner pretty consistently – he probably eats noodles for either lunch or dinner 2x per week and we’ve been so busy that he’s been getting pizza probably 1x per week too. We eat way less grains than most, but clearly it’s still too much. My goal is to come up with grain free, soy free, legume free, nut free, low in phytic acid substitutes for our grain based vices.

– Add Cod Liver Oil: We started doing cod liver oil when my son was probably 8 or 9 months old and a few months later stopped for no reason, other than the fact that it was hard for me to get him to take it.  I’ve recently purchased a new kind, Nordic Naturals Strawberry Flavored Cod Liver Oil

and am excited to incorporate it into his diet. We’ll see if he will take it by itself or if I’ll need to mix it with something. The reviews on amazon are about half and half I would say.

– Add Emu Oil: I recently read that Emu oil is a lot higher in vit K (which works in conjunction with the nutrients in cod liver oil to help stop dental decay).  Reviews are mixed as it causes stomach upset in some.  I’m hoping to find a way to incorporate this into our diets as well. Once I figure out the appropriate dosing and evaluate how it makes us feel I’ll give an update. I ordered mine from corganic.com, I also ordered Rosita cod liver oil for myself from there.

– Change to a remineralizing tooth paste: I haven’t been able to make and start using a remineralizing tooth paste yet but I purchased everything I need and plan to make it soon.  I’ve also decided that this is a good time to switch over to more environmentally friendly tooth brushes and recently purchased  these Kids Style Bamboo Toothbrush, made with Bamboo Charcoal Infused Bristles

for my son and Adult Bamboo Toothbrush, Made with Bamboo Charcoal Infused Bristles for my husband and I. Less plastic = better for us and the environment.

So, there it is.  This stands to be the first post of many detailing the dietary changes we’re making. If you’re trying to change your diet for better dental health and have any tips or stumble across some recipes that fit into these guidelines and our gluten free, soy free, nut free lifestyle please pass them along! I’d be glad to have them!