You are here: Home / Everything Else / My Gluten Free, Diary Free, Soy Free, Nut Free Life and How To Live it!

I have always been nut free; not by choice, errr…. I guess by choice because I want to keep living. I found out when I was young that I was allergic to soy – I gave it up for 2 years per the suggestion of my allergist and then started eating it again (supposedly it was supposed to make the allergy go away – it didn’t happen). By May 2012, I felt like crap! At that point I couldn’t even really pinpoint when/why/how I felt like crap.  The following paragraphs will give you a brief glimpse into a lot of the stuff I was feeling but it’s really only scratching the surface! I wrote about my transformation shortly after I started feeling better and I’m so glad I did.  Now, years later it’s hard to even remember all of the stuff I was feeling back then. It was truly horrible! Look at how tired I look in this picture….I remember this day, I felt soooo yucky both physically and mentally…. 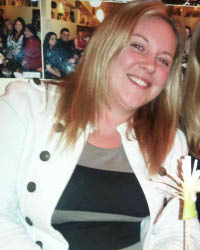 I’m not sure exactly when I started feeling like crap. I’m pretty sure it started when I lived in this old mansion in college that was filled with mold (typically stressors, environmental, emotional, etc cause our bodies to “flip the genetic switch” and start reacting to foods). It definitely got progressively worse over the next four years when I had graduated from college, moved to a new city, started a new job, and started being “an adult”. I thought it was just me adjusting to “real life” but I knew that other people didn’t feel this way. I honestly felt miserable every minute of every day (and night). I was so tired all the time, it was so hard for me to get up no matter how much sleep I got. I had a weird mental fogginess, I couldn’t focus and it was getting worse everyday. Every single time I ate I felt nauseous, after only a few bites of food I felt unbearably full, for hours, sometimes even overnight. A lot of nights I had severe heartburn, nothing helped it. I ate a lot less, and a lot healthier than my colleagues but for some reason I was always gaining weight. I started noticing pain in my wrists and shoulders randomly that would sometimes keep me up at night. After my first year at my “adult” job I had gained nearly 40 pounds – I tried dieting but nothing seemed to work. I seriously hate looking at these pictures, they remind me of how bad I felt but I want everyone to be able to see how much changing my diet helped me! 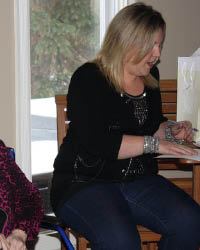 For about 3 years I went on with life, not living really, but managing being tired and feeling sick all the time. When I got home from work I would crash, sometimes falling asleep at 7pm or earlier (but still not feeling rested later). On weekends, I wanted to go out and would try, but if I ate dinner first, I would feel too sick .  The worst part was that I felt like I was starting to develop anxiety. I’ve never had any issues with depression or anxiety in my life but feeling sick all of the time was really starting to get to me (or so I thought, some mental issues can also be tied to food intolerances).  I was never afraid of flying but I started to develop anxiety about it because I was nervous about being sick when I couldn’t get to a bathroom, I didn’t want to go out with friends to eat because I was worried about sitting at a table where I was blocked in by people, I  HATED riding the El, I absolutely could not be somewhere where I felt like I was trapped if I felt sick.   My family could tell that I wasn’t myself anymore. My fiancé was frustrated because I didn’t want to go out and do things and went to bed early. He was worried about me and I was worried too – I wondered how I was going to handle a job, potentially a family, for the rest of my life feeling like this.  Even when I was able to go out and do things I was just trying to live through feeling sick and tired. The picture below is from a friend’s wedding – feeling like crap per usual – you can see the tiredness in my eyes… 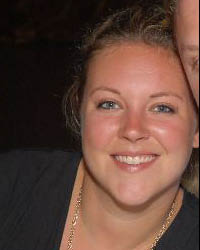 Because I had allergies, I decided to run a food sensitivity panel on myself (this was in February 2012). When it came back I was astonished, I was intolerant to A LOT of stuff! Hmmmm…so basically I’ve been eating stuff all day, everyday that does NOT get along with my body. After a few months of toying around with the idea of changing my diet I finally cleared out the pantry and fridge of everything I couldn’t have in May of 2012, deciding to eliminate the foods for 3-6 months and then try and reintroduce them one at a time and see if I still react to them. These pictures are from about 1 month after the change in my diet… Looking back on these now I can tell just by my eyes and smile that I’m feeling better. Look at how much thinner my face is! 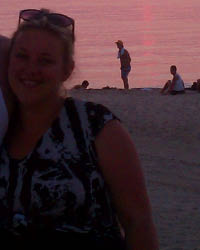 According to my test results I’m intolerant to not only gluten, but also almost ALL GRAINS.  Yup, pretty much everything – so the gluten part, wheat, barley, and rye – but I’m also intolerant to amaranth, buckwheat, teff, sorghum, brown rice, oats, etc.  Because of my nut/legume allergy I also can’t eat any nut or bean flours. I’m intolerant to the whey in cow’s milk, goat’s milk, and sheep’s milk (bye bye boat cheese) and soy (which I kinda figured).  I’m also intolerant to both bakers and brewers yeast – this was maybe the hardest for me because brewer’s yeast is used to make vinegar so I had to cut out a lot of condiments for a long time).

Here’s a list of everything I had to initially cut out of my diet:

– Any gluten (so that includes anything with wheat, barley, and rye)

– Most grains including many that are gluten free

– Brewer’s Yeast (which is in beer, wine, liquor, vinegar, etc)

– Cow’s, Goat’s, and Sheep’s Milk, specifically the whey in it

– All nuts; peanuts, cashews, walnuts, pecans, almonds, etc. (I can have coconut because it’s a fruit, not a nut)

The first few weeks were hard and unfortunatley I didn’t really keep track of how long it took to start feeling better; however, three weeks into my program my dad made a comment that I looked really good, brighter, happier – it was at that point that I realized I felt better too.  I felt rested, I didn’t feel sick, and I had lost a few pounds (I lost 6 pounds in the first week alone!). I had energy again; I could go out after eating or could get stuff done after work instead of just going to bed.  I was more focused at work.  Actually, I had wanted to find a new job, but I hadn’t left my old job because I was so foggy I couldn’t even imagine going to a new job interview and learning a new job.By the second month I felt so much better, I finally felt like I could start looking for a new, more appealing job (I did, and I got it)! My fiancé says I am my old self and fun to be with again.  Just thinking about how I used to feel makes me feel sick!  I can’t imagine living like that again!

After 6 months on the diet I felt like I had my life back! I lost 37 pounds in the first 6 months and I didn’t count calories, watch fat or feel like I dieted at all! I had completely changed my lifestyle but in all actuality it wasn’t that hard.  The first few months were a little tricky, reading labels, trying to find substitute products, recipes we likes, etc. but now I had my favorite products, grocery shopping was easy again, and I was happy! A few months after that I decided to start this blog to keep track of my recipes, my garden(ing success and failures) and anything else I felt like.

Here I am 6 months into the diet… Healthier and happier! 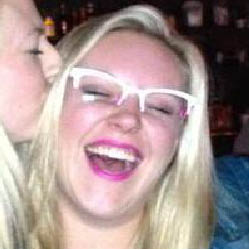 As you can guess, my diet was pretty limited at first. I was used to using a lot of meal starters but decided that I was also going to go organic and at this time there weren’t a lot of already prepared products that I could have.  Even though it was hard (and can get a bit expensive at times) I would NEVER go back to eating this stuff again! Also, you’ll notice I eat things like cabbage, brussel sprouts, spinach and berries again. After 6 months of not eating them I reintroduced them and they don’t seem to cause me any problems.