You are here: Home / The Studio / For the Little Ones / Halloween Activity, Day 4: Painters Tape Pumpkin Painting, Toddler Activity

All of a sudden my LO LOVES painting, especially finger painting. It’s odd because when I tried to get him to finger paint a few weeks ago he wouldn’t and would only used this roller thing. Now, he likes to use a paint brush but he uses it to paint his fingers and then uses his paint colored fingers to paint on paper, pumpkins or whatever we’re painting. After about a week of painting everyday he has now tired of painting on paper….time to paint on other things….like pumpkins. Like every toddler activity, there’s an opportunity to learn. We worked on shapes and colors (the LO has known his colors for a long time so we worked on mixing colors).  We made pumpkins with “circle” eyes and “triangle” noses, “rectangle” teeth and an “octonaut” (octagon) nose (that’s a TV show but that’s what my son calls octagons). We started with red, yellow, and blue – then he had to have black, so in all actuality, when all was said and done, the only color we had was greenish brown and black. But we did kind of mix some colors and the LO had fun!

We had 1 small pumpkin and two large that we were planning to carve, but I decided to let the LO paint his instead.  Then, he loved painting on stuff that wasn’t paper so much, that I had to dig into the handful of little pumpkins that I bought to make homemade pumpkin pies….maybe the paint will wash off so that I can still use them for food? Not sure about that one….. Anyways, be prepared that one pumpkin may not be enough! 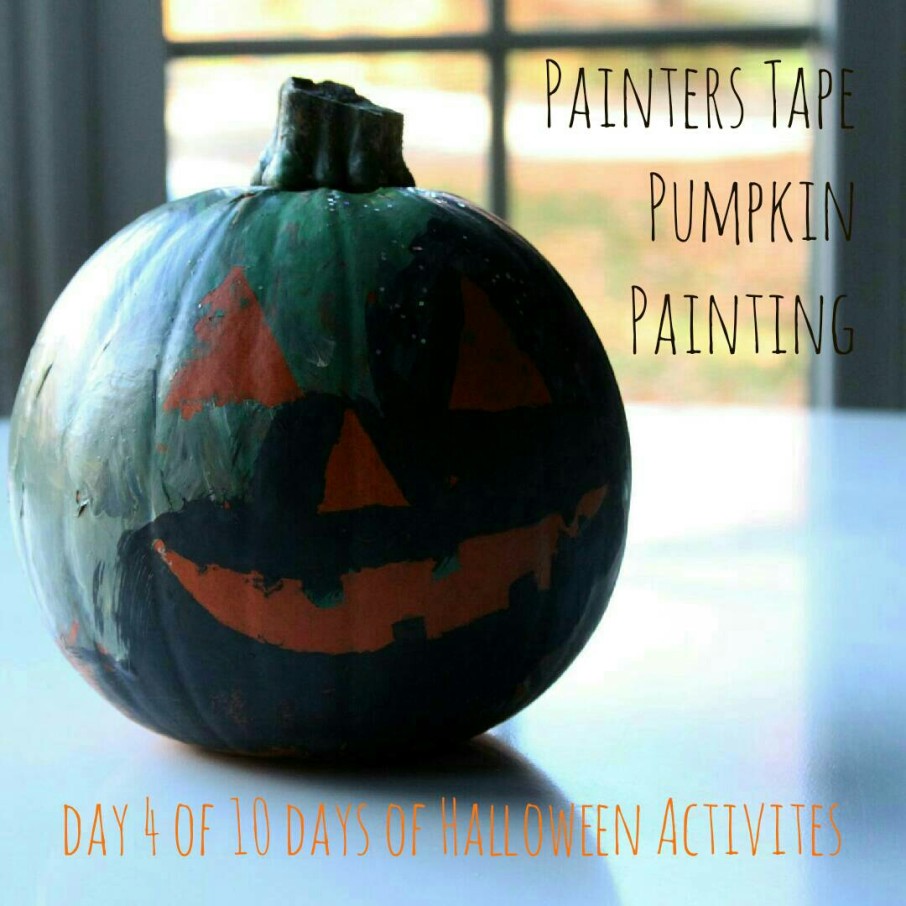 Scissors (for the adult only)

Work with your toddler to come up with some shapes to use for the face and cut them from the painters tape. Here’s one of the many we designed. Unfortunately this will be the only one you’ll get to see completely finished because my son decided to throw them all down the stairs to our basement and this is the only one that survived. Yes, that’s pretty much how my life works 🙂 (wouldn’t change it for the world though) 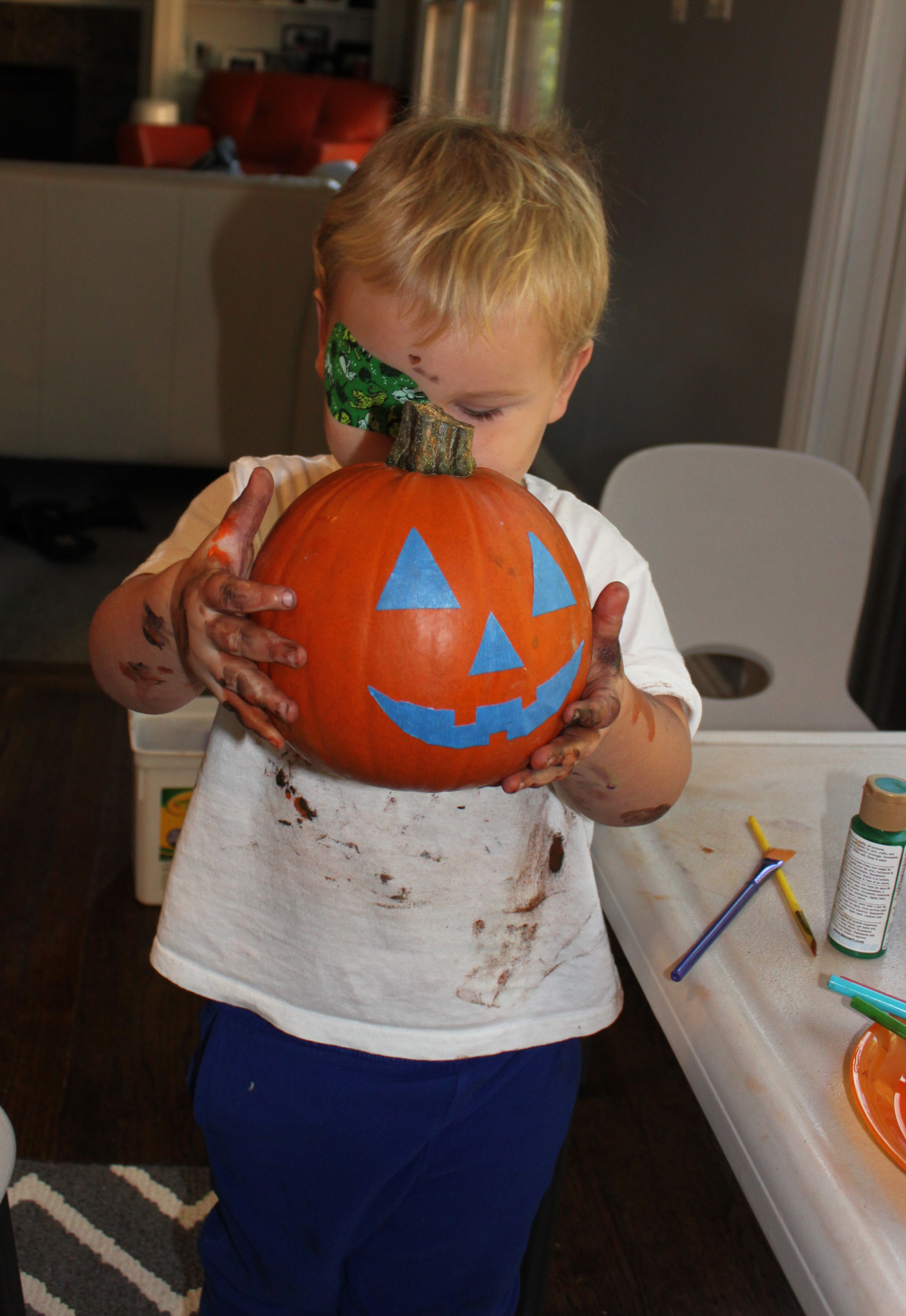 Then set up all of your paints and let your LO go wild! We have a special painting shirt (as you can see) because these are acrylic paints that will stain once dry.  They will usually come off of things like the table once dry but you’ll really have to scrub. It’s best to wipe them up right after you’re finished.  Here’s my little man having at it.  Notice the progression….. Nicely painting with a brush…. 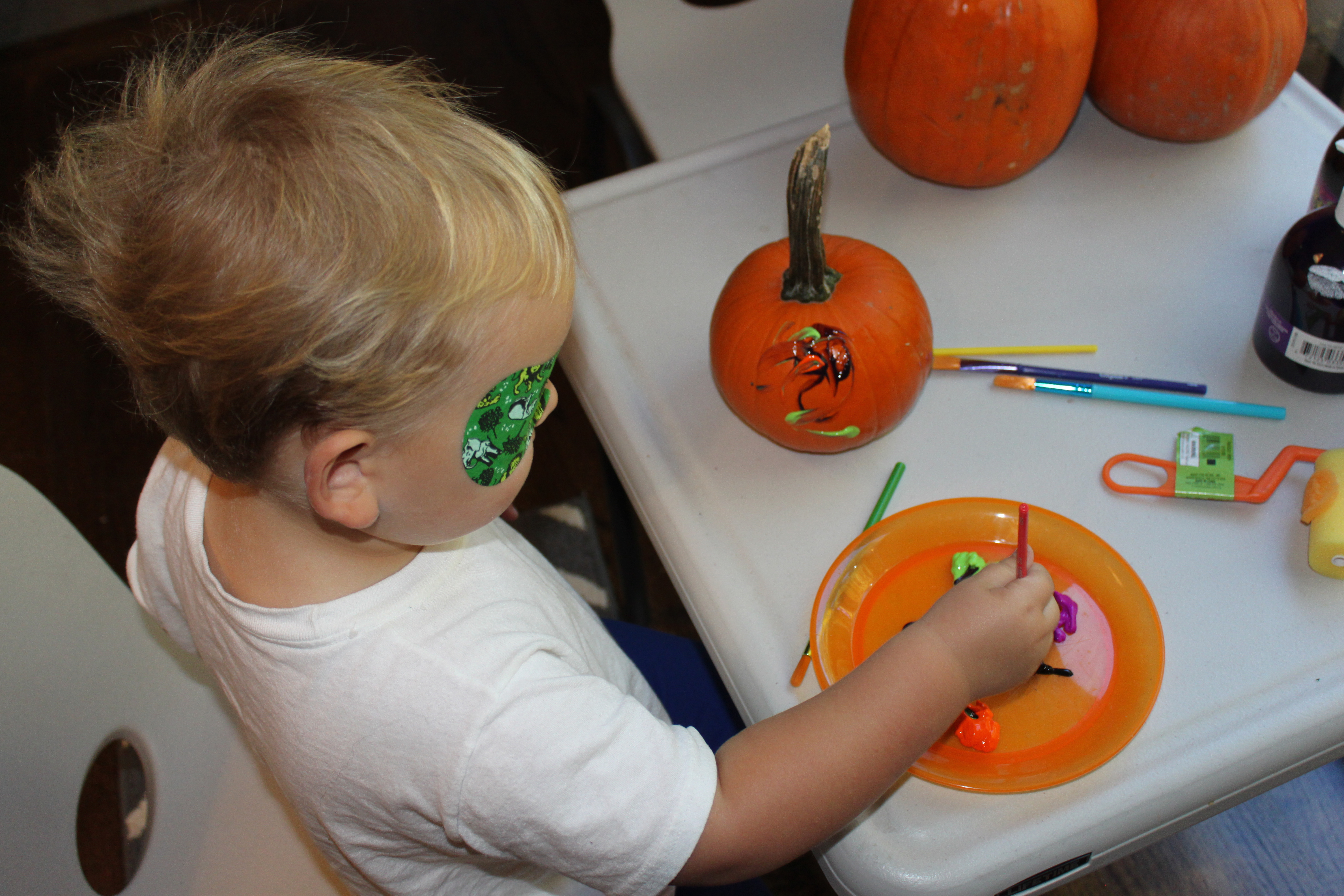 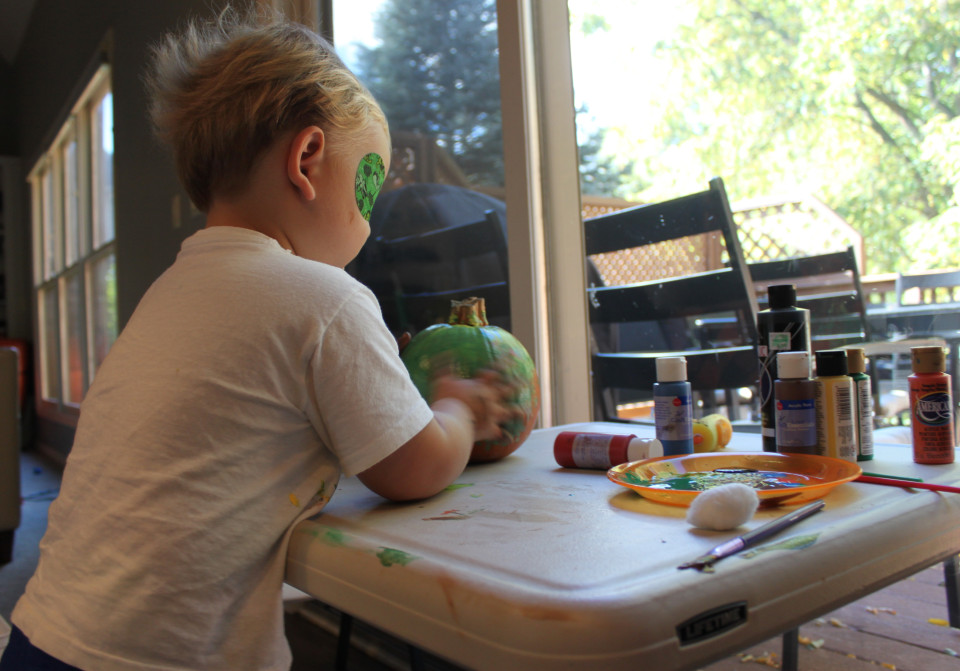 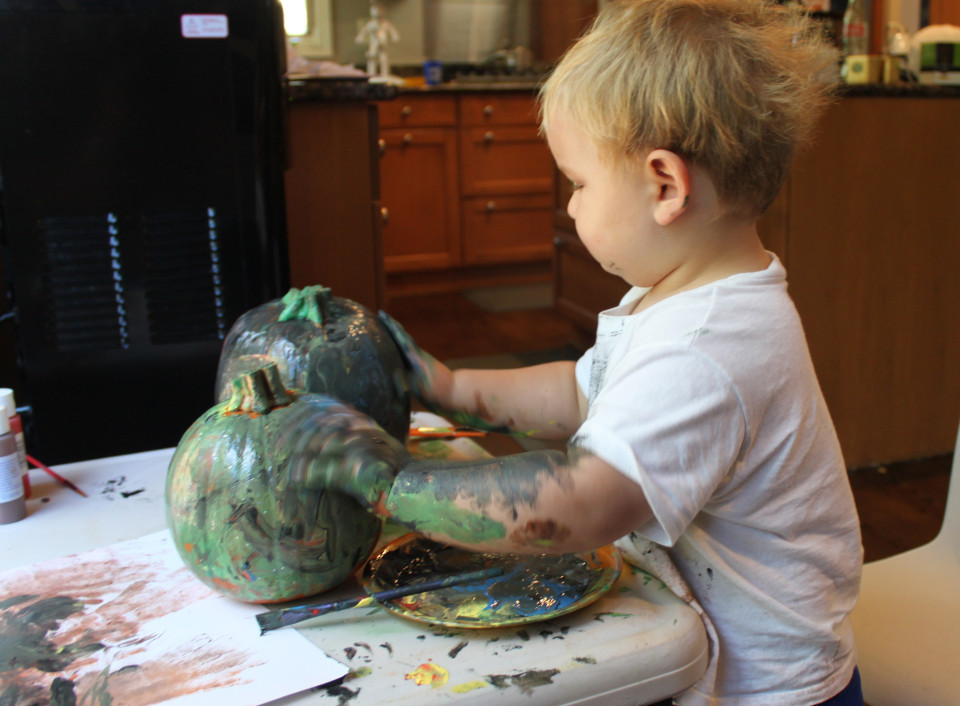 On second thought, I think I like the paint brushes better…. 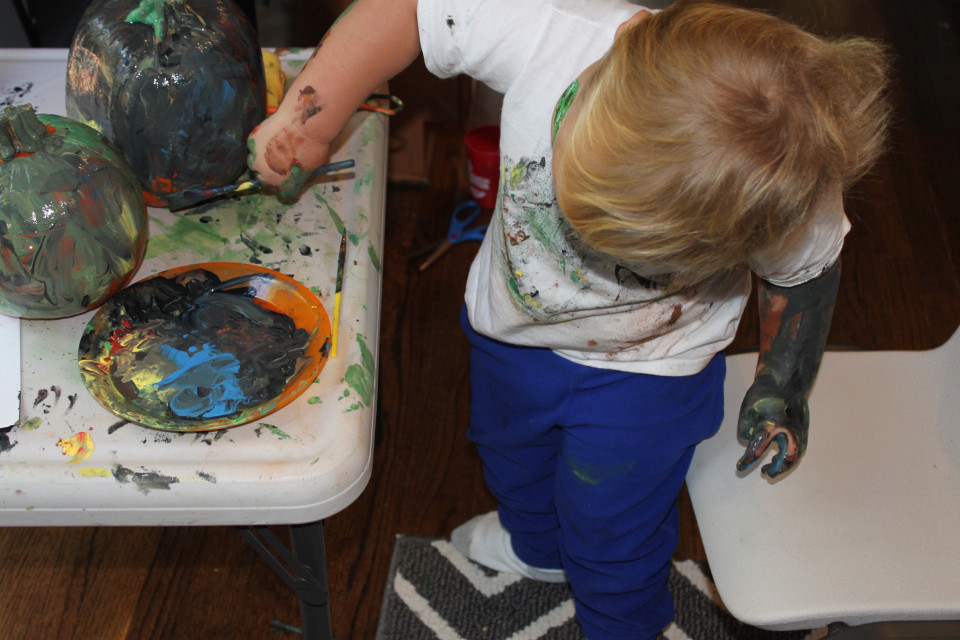 Yeah…. I definitely do…. 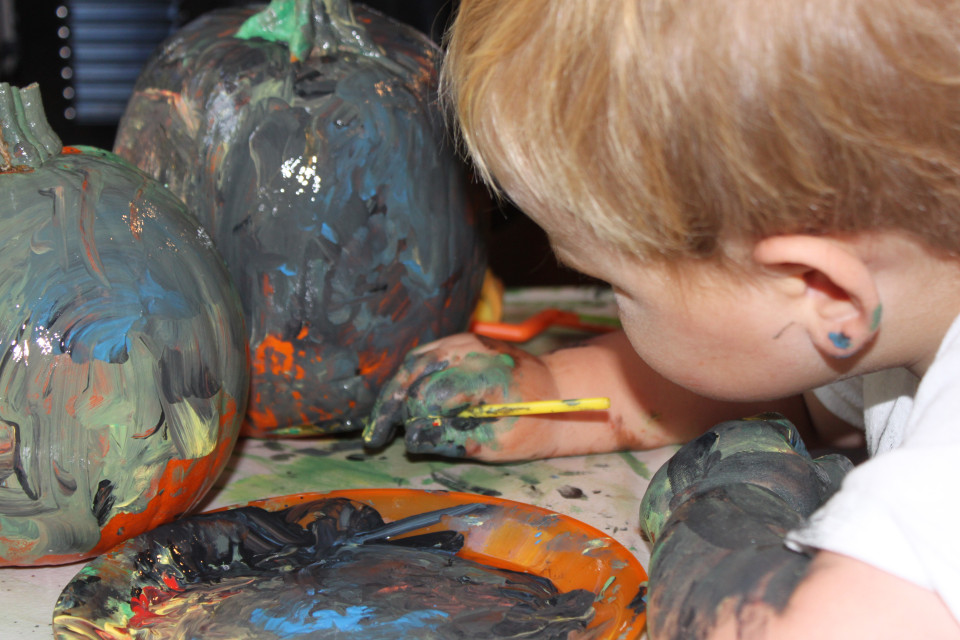 In the end you’ll end up with something like these….. 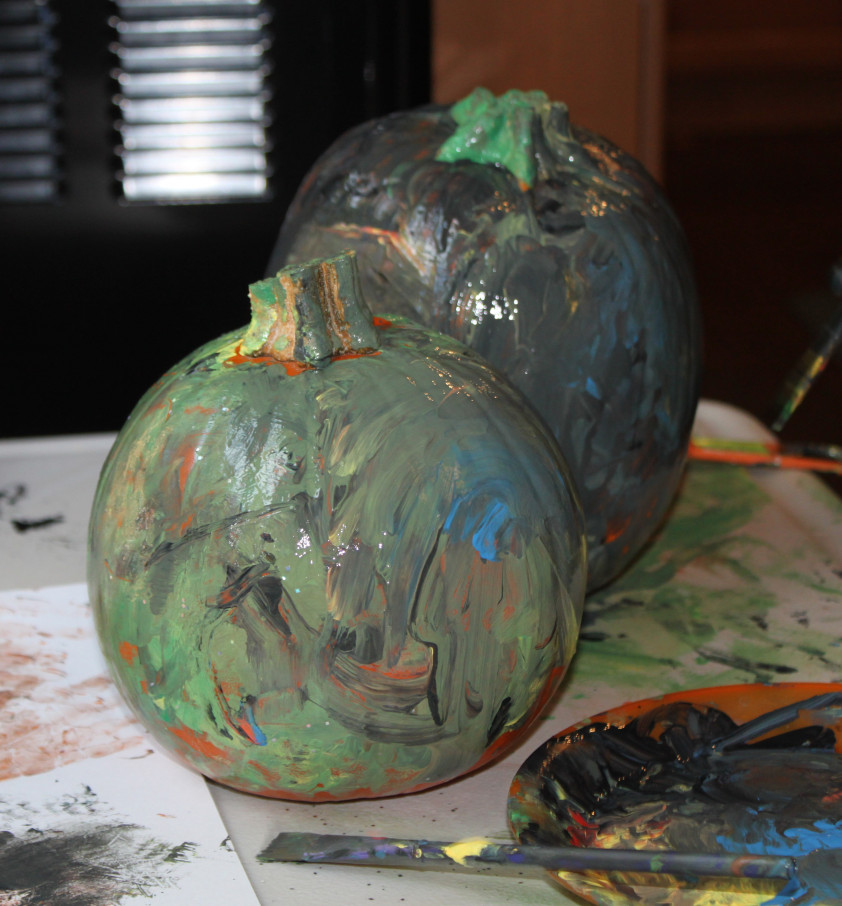 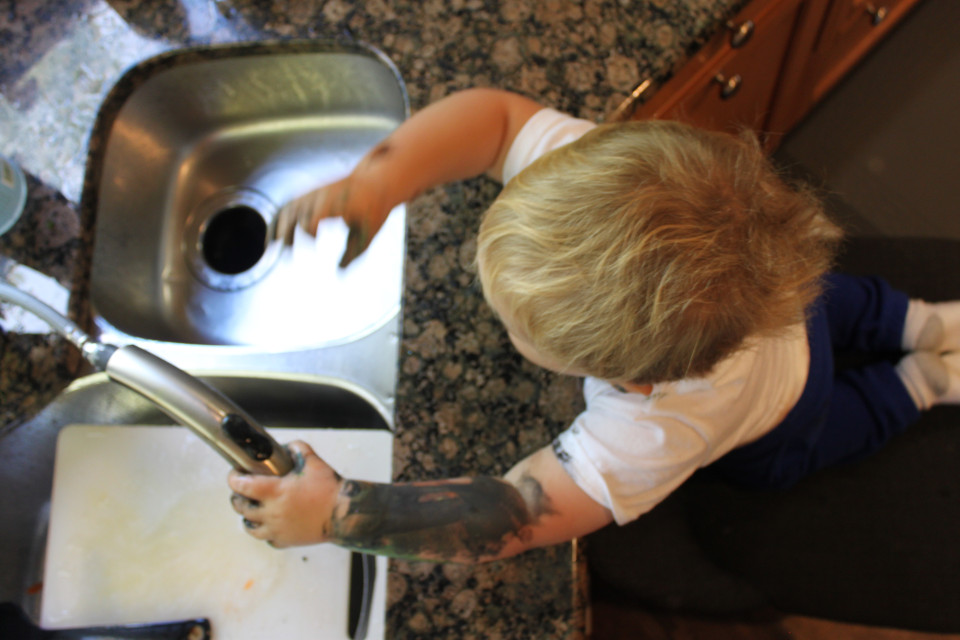 And then later, after the paint has dried, peel of the painter’s tape to reveal your jack o’lantern face…. 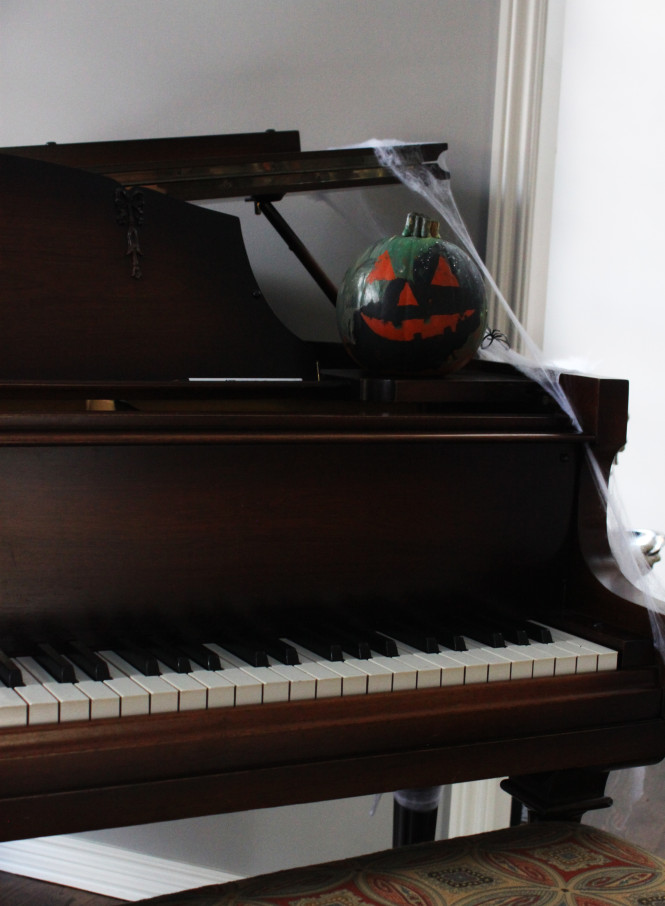 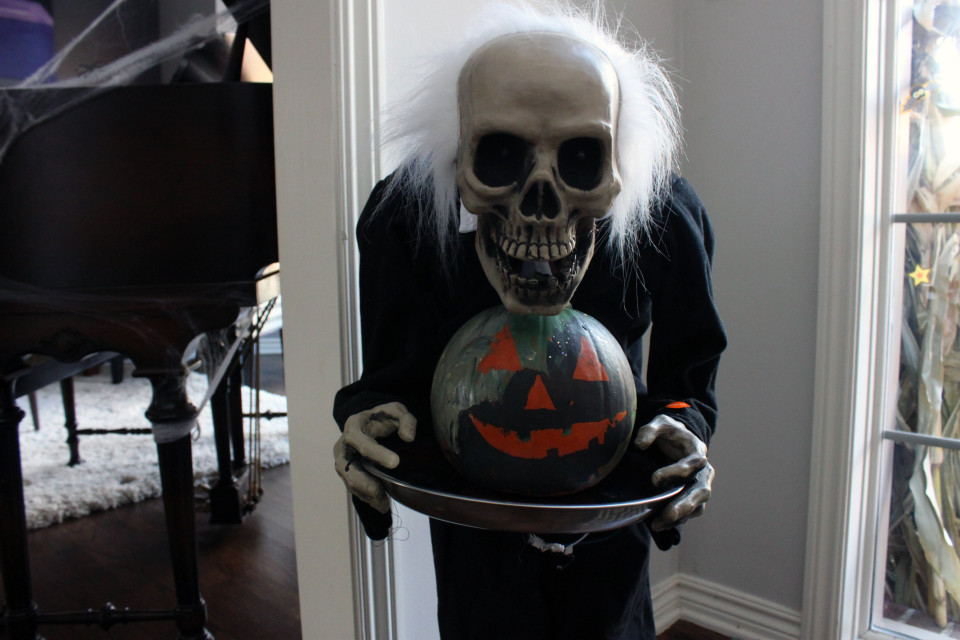