I can’t believe how beautiful these cupcakes turned out! They were surprisingly easy (for me, I do have some artistic talent though so don’t hate me if you have troubles :). I looked online for pictures of flowers and the just winged it.  Afterwords I was wishing I had taken some videos as a tutorial so I spent a ridiculous amount of time drawing a few tutorials (see them below) that pretty much give you no idea how to do this successfully haha sooo…. I’ve also included some links that I found after the fact that somewhat mimic what I did. 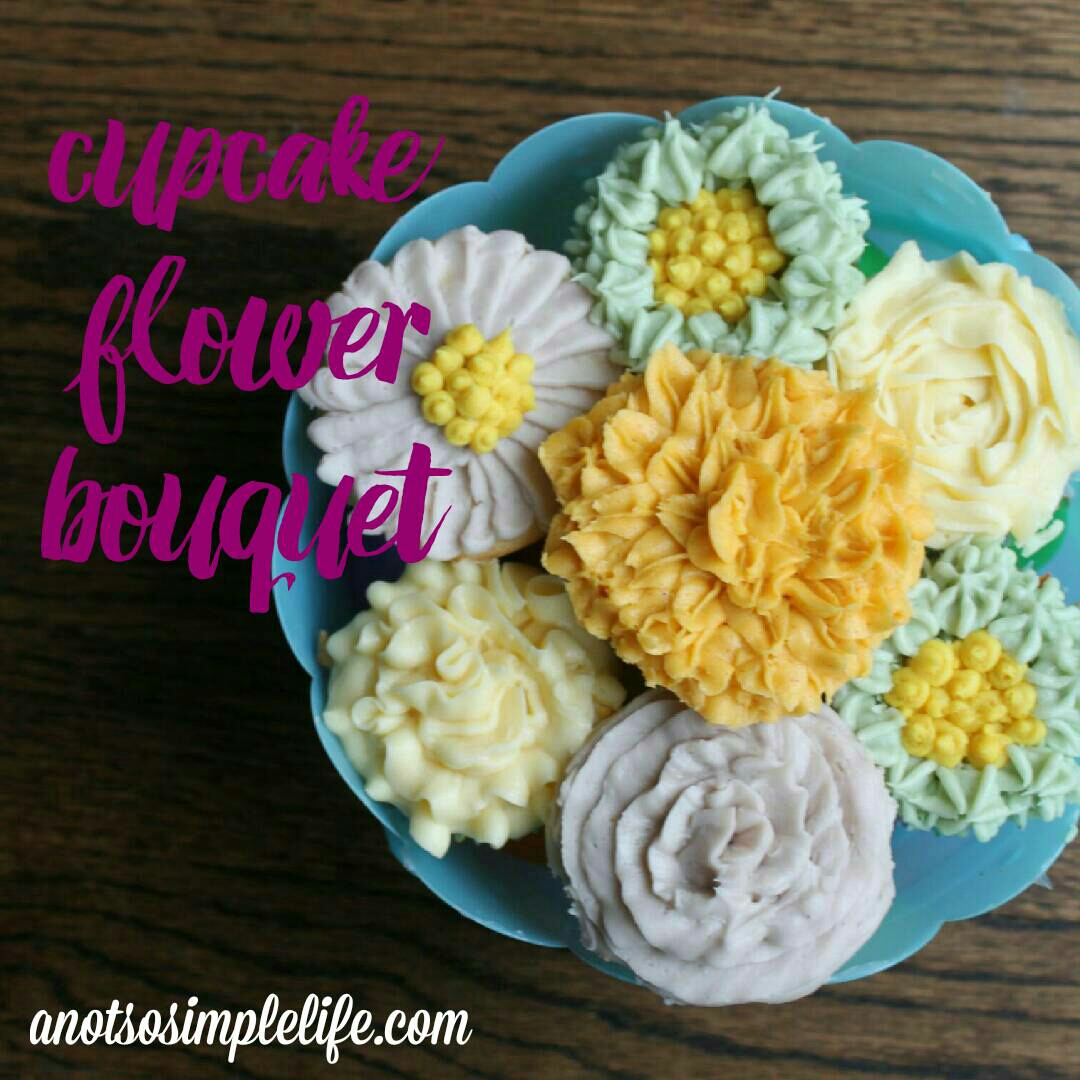 So I actually made these for my beautiful Grandma for her 85th birthday a few weeks ago (when I say beautiful I mean it, she was a model). These would have been great to bring to our Mother’s Day celebration because me, my mom, and my grandma are all gf (no dessert for us). We celebrated Mother’s Day today (a day early), because we all have so many families to see (as my brother-in-law says any time his parents, step-parents, parents-in-law complain about a less than perfect schedule – with a smile on his face of course  – “Hey, you guys did this to us ok?” We had fun but it’s always a bit crazy with little ones running around. My little guy is ABSOLUTELY in love with his two cousins (both girls), one who’s older by about a year and one who’s younger by about 6 months. They were hugging and holding hands and walking around talking to each other. It was possibly the cutest thing I’ve ever seen and made me realize that it might be time for another baby, or it’s at least time for the LO to try out daycare once in a while! Anyways, you wanna make some cupcakes that look like a bouquet of flowers? Here’a what you’ll need: 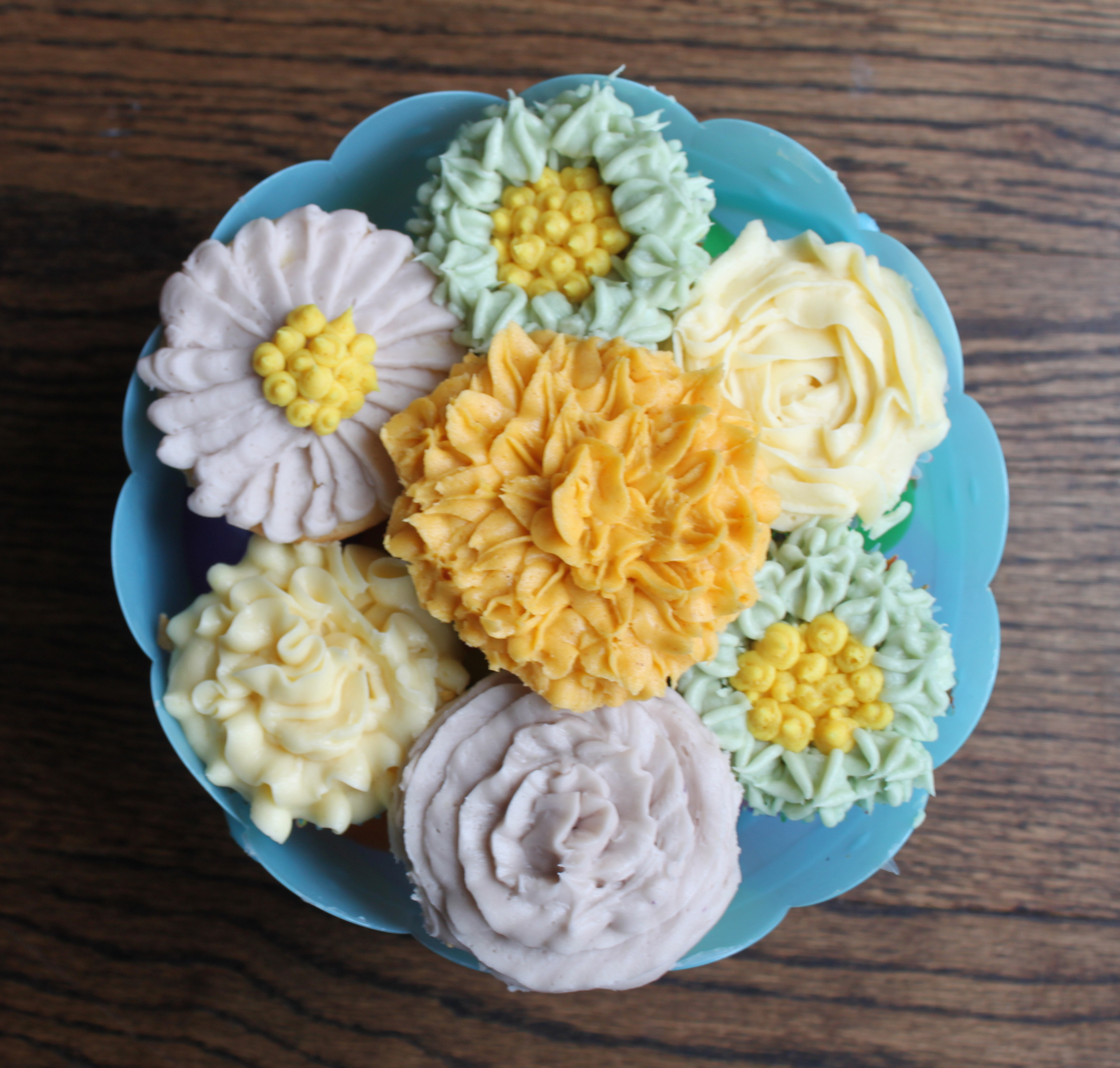 Tools you Need to Make A Cupcake Bouquet:

Wilton Icing Tips, the one’s I used were #8 for yellow (or any round tip), #18 for blue (or any start tip), #124 for purple and white (or similar petal tip) , #69 for orange (or similar leaf tip), or do what I wish I had done and buy a kit that includes a whole bunch of similar styles like this one Wilton 2104-2531 Deluxe Decorating Tip Set

a spatula (for filling the bags)

24 baked cupcakes (mine are gf, df, sf, and nf – made from cupcake mix that you can buy here – King Arthur Flour Gluten Free Yellow Cake Mix

Something cute to put them on; mine are in a picket fence bucket that I got at the dollar store around Easter. They would also look super cute arranged on these Leaf Serving Trays

that end up being about a dollar each!

Food Coloring of Choice (All of these were colored naturally – I’ll be writing a post on Natural Food Coloring soon so check back!)

First and foremost, make sure your cupcakes are completely cooled before you start piping….

For the Blue Flowers: I used the star tip making 2 layers around the edges first, then I used the round tip to fill in the center. For the orange flowers I used the leaf tip, started on the outside and worked in a circular motion until the entire tip of the cupcake was filled in. I pretty much used the same technique as described here, squeeze, slight twist, lift: Lora Lee Lewis’ Blog 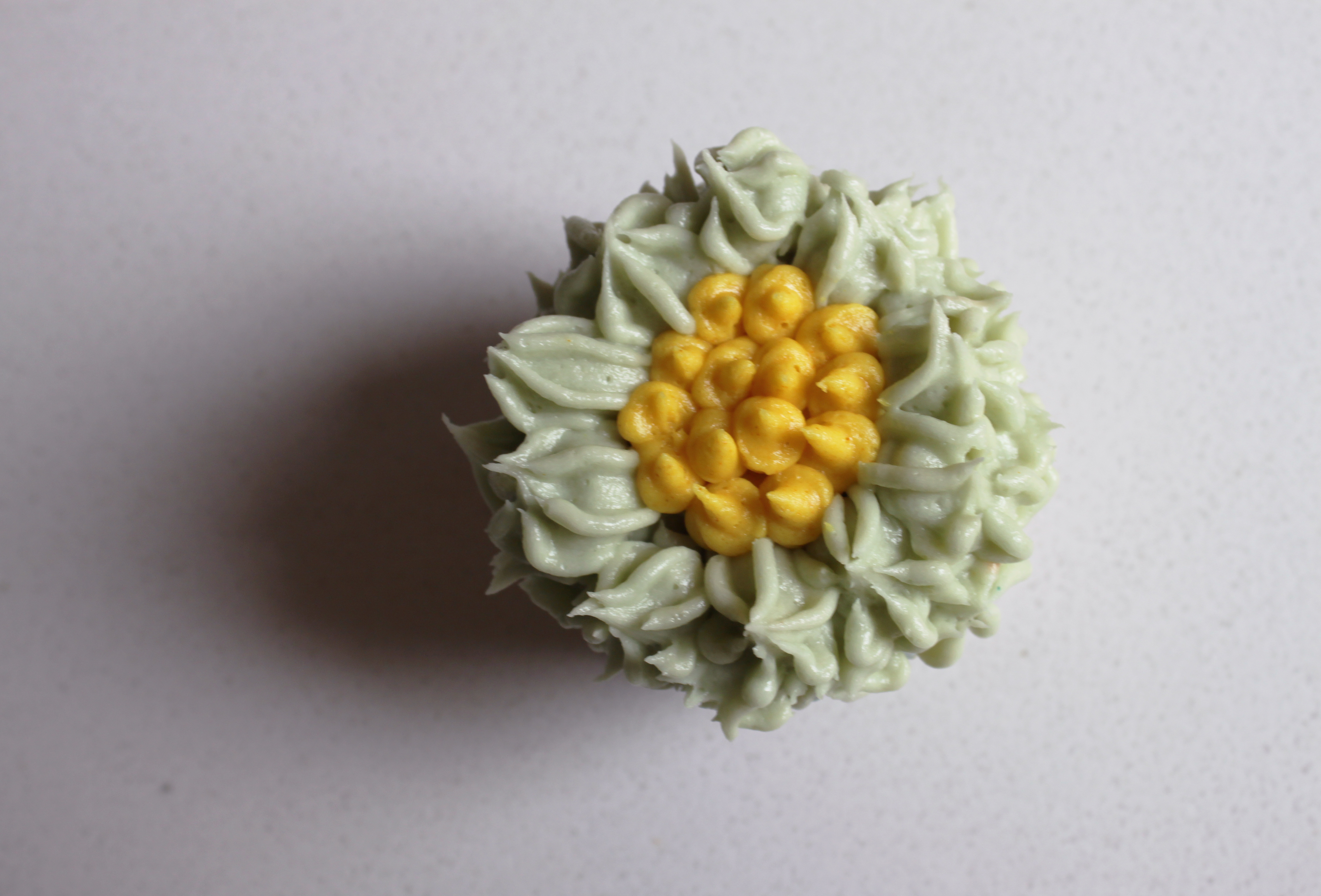 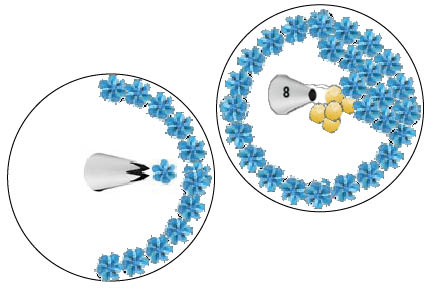 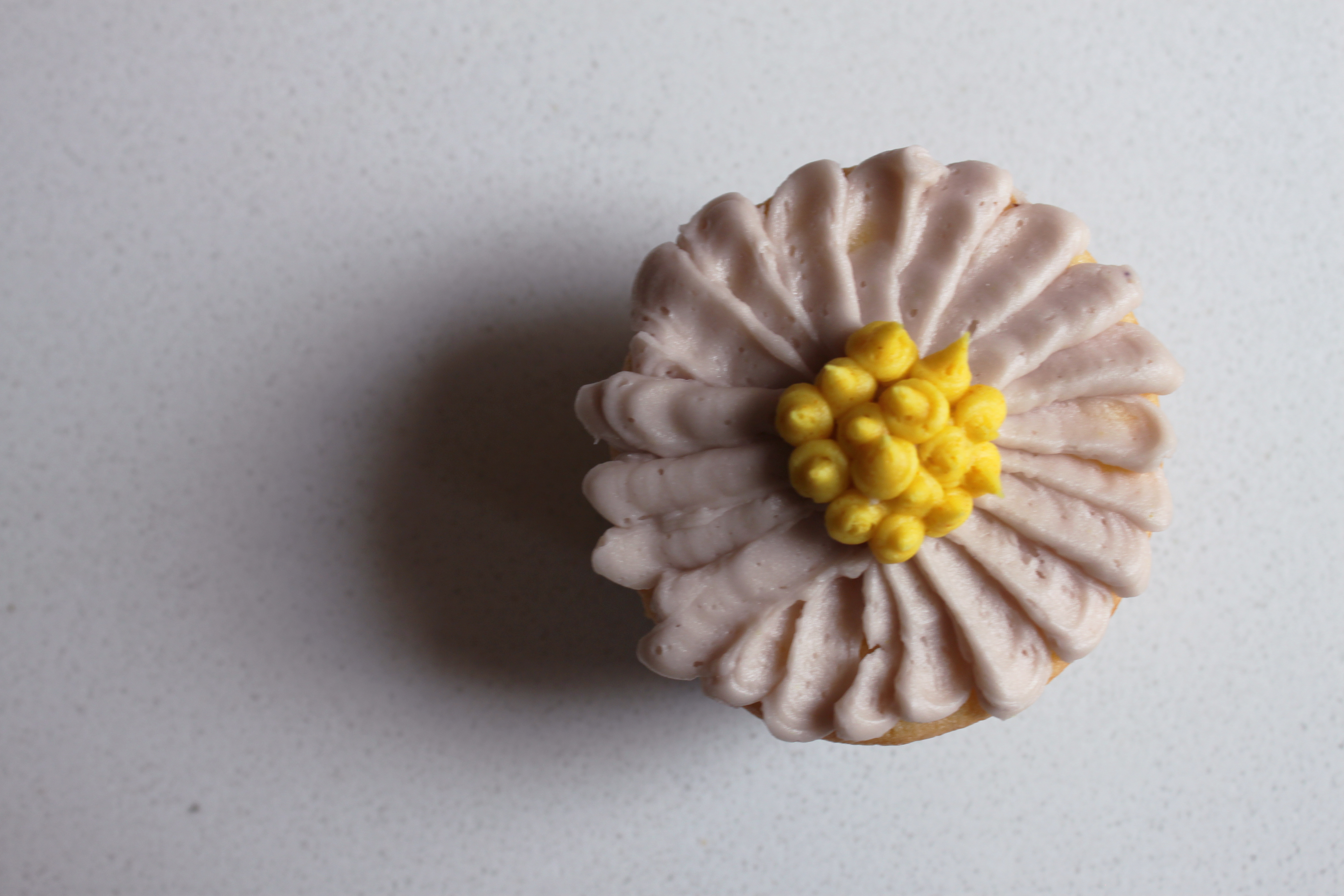 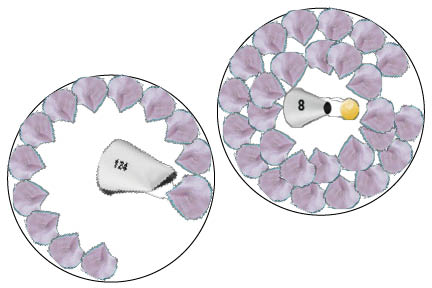 For the Orange Flowers: The orange flower is my favorite, I used the leaf tip. Place the tip onto the edge of the cupcake, squeeze and lift off. Repeat all the way around edge and then circle towards the center. 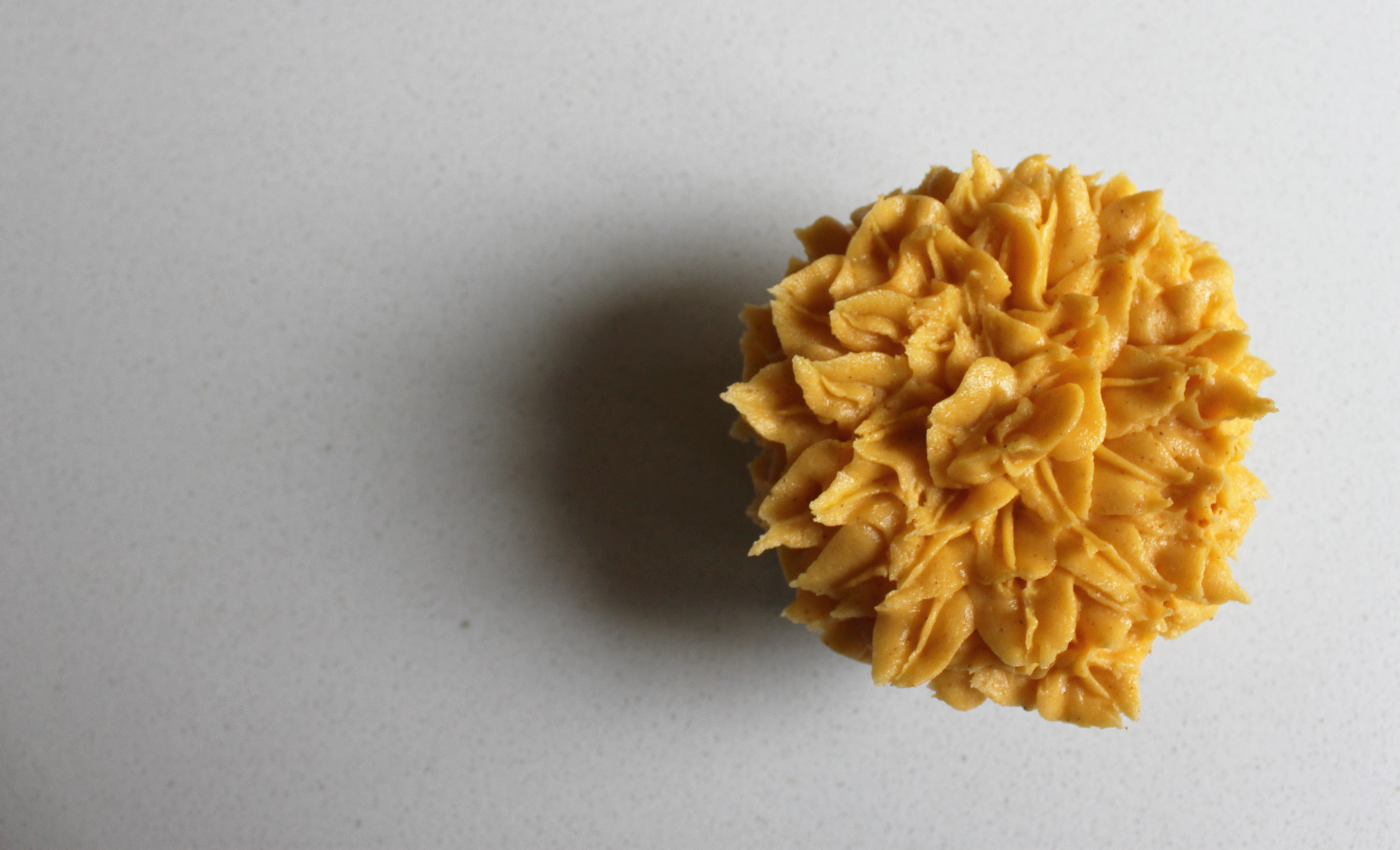 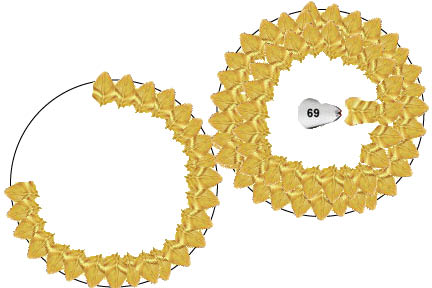 For the White Flowers: I’m pretty sure I made the roses way harder than they need to be.  Everyone says just get a 2d icing tip and it’s super easy. Check out this rose icing tutorial at Created By Diane 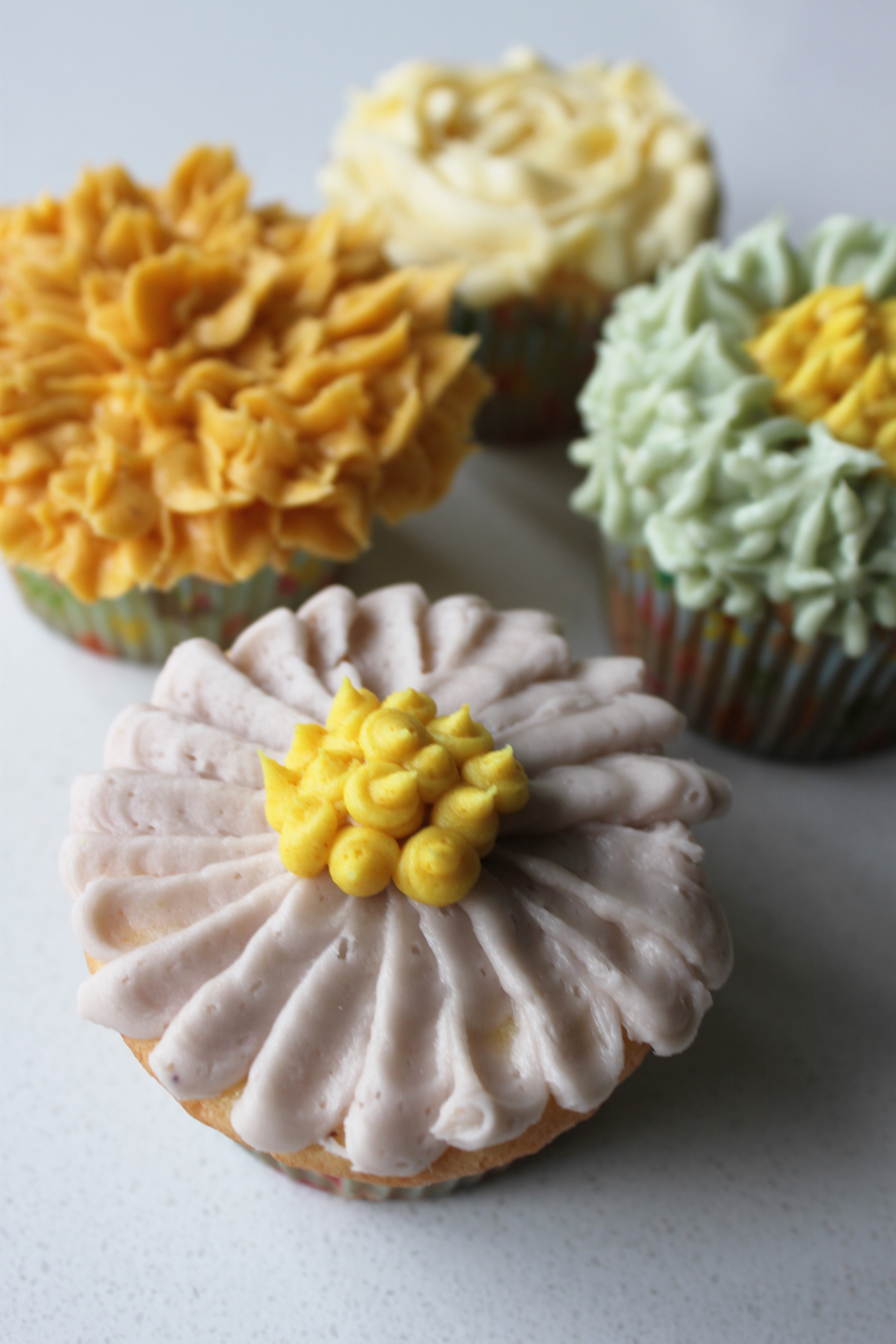